I set off for Turkey looking forward to getting back out there and playing at one of my favourite courses/tournaments. The National is a tight course and always in good condition.

Karen caddied for me but unfortunately I missed the cut again. The front 9 of the first round I struggled with my swing, this was mainly down to me trying too hard and forcing it. Desperate to do well! Less is more in golf!!!  I hit a shot towards the end of the front 9 and from then on my swing clicked in to place. The back 9 was a lot steadier so I was feeling more comfortable heading in to the 2nd round the following day.

I teed off in the afternoon on Thursday and it rained all the time I was out there and all evening. The rain doesn’t bother me but it was frustrating being 20 minutes away from teeing off in round 2 on Friday morning and hearing the Klaxon. Play was suspended for 2 hours due to the threat of storms… 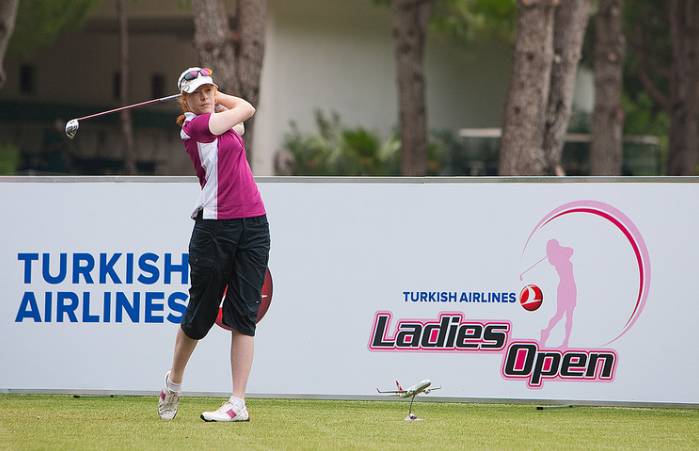 Once we eventually got going, I was much happier with how I played. I was gearing up to go on a run but had some real bad luck on a par 5. Another half roll of the ball and I would’ve had a straight forward bunker shot, instead I was left with a pretty much unplayable shot. I had a couple more bad breaks and without sounding like I’m making excuses, it’s hard to take when you’re fighting and hitting good shots but getting no rewards.

I was really gutted at having missed the cut in this tournament but tried as always to take the positives from the two rounds. My putting was better and that’s something I’ve been working on…

So, it was back home for a week where I was pleased to meet up with my Uncle, Glenn, who is also a Pro and has played on the European and Seniors tour.

We had a really good two hour session on my swing and short game and I left feeling a lot more upbeat.
On to Holland where my Dad was on my bag. I played the practice rounds on my own which was nice and made sure that I mapped the course out thoroughly. The course we played sure needed mapping out! It was a good test, links style and the run off areas around the greens and bunkers were to be avoided wherever possible!

Some of the greens were like camels back (see photos) but they were rolling so pure and fast. The front 9 of the first round I got in the wrong green side bunkers 3 times and wasn’t able to get up and down, not down to poor shots I hasten to add! This was a shame as I was playing pretty good. I kept going as always and holed a good birdie (finally!) on my last hole.

I felt happy overall despite my score because it was the best I had felt on the course this year on tour, I had a spring in my step and a clearer head. My natural game was coming out…

I continued this state on Saturday in round 2 and again hit a lot of good shots to set up birdie opportunities. My Dad counted that I had 5 lip outs/shaved edges on the front 9 alone and this was really frustrating.

I made two silly doubles on 14 and 15 out of nowhere really but then hit good approach shots in to the last 3 greens. I didn’t manage to hole any of them which was hugely disappointing but that sort of summed up the round…
So, it’s hard to take again that I missed the cut but I feel way more positive now in that my long game is closer to where I want it to be and aside from the actual golf, I’m more content and relaxed on the course. I just need a bit more luck on my side and bigger holes!!!

I know that once I make a cut which I feel I deserve, I will be fine and hopefully go on a good run. It’s a shame that the next tournament isn’t until 3 weeks time.

It does, however, give me time to sharpen up my game even more, work on the changes my Uncle gave me and try to find a ball that isn’t scared of the dark!!

One thing to mention that was nice to hear, was that the spectators said how smiley I was no matter the situation on the golf course. Yes, I was frustrated at times but it’s still important to remain upbeat and respectful of the spectators and marshals.

Thanks everyone for you’re continued support. Especially to all of my sponsors… I won’t ever give up!