From Slovakia to Germany 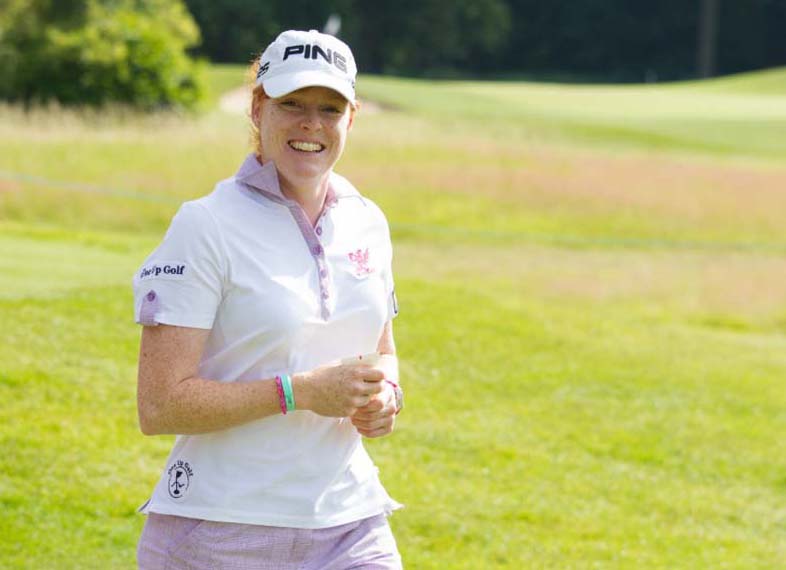 Wow, what a busy 3 weeks I’ve had! No time to keep you all updated, sorry!

It started in Slovakia where I finished 3rd overall with a score of 3 under. The course is a Ski resort so you can imagine how up and down it is and the greens are so undulating that on a few of the greens, we had the same pin positions for all 4 days!!
It’s a good course and I liked it because you have to shape shots and feel them. The first two rounds were consistent – a load of pars and a few birdies for level par. This meant that I made the cut and finally got to play at the weekend! Round 3 was good too and my back 9 I shot 2 under to finish 1 over par.

So I was in a decent position and looking forward to playing the final round. Again, it was a steady round and I had 7 birdies to shoot 4 under! I had no idea of my round score whilst playing even though we had a scoreboard with our group. There were boards at various places on the course but I don’t tend to study them. It makes for a nice surprise at the end!!

When I finished on the 18th hole, my caddy told me I had shot 4 under and I could then see I was in tied 3rd position.

This felt great and a nice reward for the hard work I have put in this year.
To play and score consistently well for four rounds on a course like that, which was so mentally demanding was a real achievement. And a big step towards retaining my card for next season.
But there was no time to celebrate – it was straight on the road for the 3 hour journey to Bratislava airport, then another hour to Vienna airport where I stayed with friends ready to depart to Italy the next day!

So, eventually when the packed bus left Rome airport, it was the start of another nearly 3 hour bus journey to the hotel.

The course in Italy was to me quite English like – tree lined parkland, a couple of holes with trees in the middle of the fairways and in front of greens…!!
A nice course and in good condition.

It was so hot whilst we were there! The temperature reached nearly 30 degrees when I was playing my first round in the afternoon! Too hot for a redhead!! And tiring especially after Slovakia.
This seemed to make the ball fly further and what with me being stronger through playing lots of golf, I was flying pins/greens!

Not good as we struggled to work out yardages and a few times it got me in to trouble.
As a result, I was lacking confidence with approach shots and I missed the cut…

A horrible feeling but I had to take the positives as always and look forward to the European Masters at The Buckinghamshire – a ‘home’ tournament!

Before that, there was a delayed flight home from Rome on the Sunday evening which meant that I had around 5 hours sleep, if that, before I was up to play in the Ricoh Womens British Open Pre Qualifying at The Berkshire on Monday morning.

I actually didn’t feel too bad and had a goof friend caddying for me which was a great help. We had fun and she kept me going, thanks Kate!

I still struggled with my yardages but was happy with how I played. I gave myself birdie chances towards the end but unfortunately didn’t convert them. This meant that I missed the cut by two shots… Very frustrating and disappointing.

No time to dwell on that though as Tuesday I went to The Buckinghamshire to register and walk a few holes ready for round 1 of the Ladies European Masters on Thursday.
I had great support from my friends that came up to watch on Thursday and Friday which was lovely and always gives me a boost.

Round 1 I struggled a little and had a couple of bad breaks that could’ve gone the other way so I ended up shooting a little too high… The highlight was a chip in for Eagle in front of the crowd followed by a tap in birdie on the next.

The weather was nearly as hot as Italy and the greens with the heat and wind in the afternoon, were very slick!

After the round, I headed to the range to tweak my swing ready for round 2.
It felt much better on Friday and I played pretty well getting myself to 3 under at one stage (I only knew that afterwards!) but I ended up shooting 2 over par which really should’ve been level/1 over at worst. The greens and me aren’t the best of friends at the moment! Still, I felt like I regained some pride and was happy overall with the round.

Like I previously mentioned, it’s horrible to miss cuts especially at a ‘home’ tournament and when I felt like I was good enough after the round 2 score, to have been playing at the weekend. Golf is a fine line sport and sometimes it doesn’t go the way you want it to. I always learn from every round I play and take the positives. There were many to take, not only on the golfing side but on the mental side too.

I’m as determined as ever to keep fighting, working hard and produce another result like Slovakia.

I have a week off this week as I didn’t qualify for The Open so it’s a chance for me to recharge my batteries and sharpen up my game ready for my next tournament in Germany – I leave on 15th July.
After Germany is Prague – a tournament I have only just decided to enter as it’s my eldest Sisters wedding that week! :-/ I feel like I want to give myself every chance of doing well and retaining my card.

Thanks for the continued support and here’s to a good couple of weeks!!

Thank you also to my friend Jo who caddied for me at The Bucks – she did a great job!