A busy but great four weeks…

I started in Spain and finished in Turkey, with two trips in between again to Spain.

The first week was another warm weather training trip shortly after my success at the Roehampton Gold Cup. The second was a big Ladies Pro Am that I was invited to play in at El Rompido, organised by Tarleton Golf Travel. I didn’t know too much about what the week would have instore for me but I was excited to get there and find out! 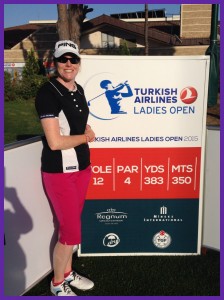 It turned out that I had a lovely team of 6 ladies from Alresford Golf Club, which is only 40 minutes from where I live. Golf is a small world!

I have to say it was one of the best weeks I’ve had and certainly the most well organised Pro Am I have played in. It was great fun, two nice courses to play on and a lovely mix of people. It was a chance to have more practice on good greens and a sharpen up my game ready for Turkey. Plus the weather was good!

The third week saw me back in Spain, this time in El Soto with two friends. We played four different courses and it was beneficial to me to keep the run of golf going…and to keep getting used to my new irons. I do love them!

The practice obviously paid off as in the fourth week (as I’m writing this), I made the cut in Turkey in my second LET event of the year.

I headed out to Turkey knowing that I was prepared and felt happy with the rhythm of my swing. It was the first tournament since my rookie year in 2010 and Slovakia last year (last two rounds) that I was to have a Professional caddy. I’ve thought about having one for a while but wanted to make sure that I was ready… Eric Black, who is an experienced caddy, was available and with the backing of my sponsors, he was soon onboard!

After a couple of practice rounds, it was time for the real thing! I shot +1 first round and +3 second round to make the cut. I was pleased with how I played and the scores were the worst they could’ve been but I wasn’t so happy with the amount of birdie chances I failed to convert. The greens weren’t easy and very big but it’s something that I haven’t been overly confident with ever since I holed everything at Roehampton!

But still, I was obviously happy to have made the cut and still had the belief that I could continue to give myself birdie chances and hope to convert a few. It wasn’t to be that way and a third round of +4 where I had a couple of bad, unlucky breaks and a final round of, well, I’m not saying as it’s been erased from my memory already, was how I finished. I hit one bad shot on one hole in particular and ended up with a high number out of nowhere and then on the next hole, my ball decided to get stuck up a tree!! Take those holes out and the score in the final round wouldn’t have been as bad.

It was a struggle and a very disappointing end to a decent start of the tournament.
The weather was amazing and really hot – minimum temperature of 28 degrees most days and on the last day (Weds) it was 20 degrees at 7am! I’m slowly acclimatising to these kind of temperatures when out on the golf course but I feel the last round may have been one round too many in that heat! The shortest round we played was 4.35hrs and the longest 5hrs!

So, although I was frustrated and miserable after the final round (and wishing I had’ve thrown my putter in one of the many water hazards on the course) I will as always focus on the positives and also work on the areas that I need to improve on.

Actually, re the putting, I visited the PING tent at Wentworth on Thursday and with the help of Geoff, Morgan and Gordon, we worked out that I need more loft on my putter for putting on grainy greens! So I feel like there’s hope now for future tournaments… I know my stroke is good so hopefully with more loft, the ball will roll better off the face and go in the hole more other than not!! You never stop learning in this game!!

It was the first time working Eric and we made the cut so onwards and upwards!!

Aside from making the cut, the most pleasing aspect of the last four weeks has been my shoulder and lower back holding up really well. I have facet joint compression pain in my back which was affecting me but with the help of the amazing Andy at the Healthflex Haslemere Clinic and Pilates with Louise, the pain has been manageable and has actually eased significantly. Thank you to them both!!

Having only been home for just over three days in four weeks, I’m looking forward to unpacking the case and not re packing for three weeks. I have to say though that I have really enjoyed the four weeks and feel lucky to be in a position where I’m able to do something I love…dancing and karaoke!! Oh, and the golf, of course!