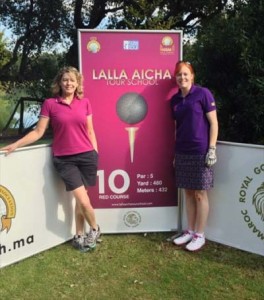 Well, what a week this turned out to be in Marrakech!

Firstly, I arrived safely this time which was a much better start! I settled in to a nice hotel and then it was off to play a practice round on Al Maaden on Thursday, which I remembered well from last year.

Thursday evening, my friend/caddy/mind coach, Karen, arrived so that was brilliant.
On Friday we played a practice round at Samanah which was a new course to the players.
Wow –  it was amazing. It was basically a Desert type surround with a Golf Course built in the middle. The condition of the course was unbelievable – fairways like carpet and the greens similar. It was so green and to have the views of the Atlas Mountains as well, how lucky were we?!

Round 1 was on Al Maaden and we got off to a good start, shooting 3 under. It was a steady round and a good one to build on.

Round 2 was on Samanah – I shot 4 over but that doesn’t really reflect the golf I played. It was a case of two silly double bogies on the front 9, 1 especially out of nowhere.

Fortunately, there was a bit of a walk to the 10th tee so that allowed me to compose myself and calm down inside. I wasn’t angry, it was more frustration that I hadn’t played that bad, yet racked up those two doubles. Still, I knew I could continue to play alright or even better on the back 9.

I played the back 9 in level par and was really happy with that. It was a case of moving on straight away, something that I’m much better at now and the back 9 proved that.

Round 3 was back to Al Maaden and again this was a steady round. Two silly bogies on 2nd and 3rd but then I bounced back well and was starting to hit and strike some really good shots. Three birdies were to follow and a total of 1 under was my final score. Happy.

Round 4 – Samanah and I seem to remember that it was a little frustrating. It seemed over the rounds that nothing much was going for us and we weren’t quite getting the breaks we deserved. The golf was good…

Over the rounds, we created a good few birdie opportunities but they weren’t dropping.
One quality I have is to never give up and keep fighting until the end. Karen is like this as well and we were to be rewarded towards the end of the round.

We finished birdie, bogey, birdie. These two birdies were crucial to not lose too many places on the leader board and obviously be sure of making the cut to play the 5th (top 60) and final round.

First target achieved… Now to carry on in the deciding final round.
The aim the night before was to just try and move up the leader board and get in to the top 30 and earn a full card.

Samanah was the course the top 60 played on. I decided that morning to mainly go out and enjoy it – the scenery, course, lovely weather – all things that weren’t going to be as nice when I arrived back home!

So, we set off and it was a similar story in that things still weren’t quite breaking for us. Patience is a virtue! But then, after a steady front 9, I holed a good putt on the 18th (my 9th) for birdie.
My back 9 continued to be steady for the first four holes and then I finished birdie, birdie, double, birdie, par!!! Phew – what a roller coaster last few holes!!

After the double in which I didn’t do a lot wrong, honestly – I was determined to make birdie on the par 3 7th. I drew in a 6 iron to roughly 5/6 feet and holed a good putt for a two! Yes!!
On the last, I made hard work of the green – it was a big breaking putt right to left but I didn’t start it high enough. It left me with a 7 foot putt that I really wanted to hole, for par. I holed it!!
A big relief and a pat on the back if I do say so myself!

Karen told me afterwards that she couldn’t bear to watch!!

I only knew what score I had shot in the recording office when signing our cards etc. It was 2 under and I was very happy with that!!
After a two hour wait and Karen pacing up and down working the scores out on the board, we finally knew we had done it!!! Tour card earned and back on tour for 2014!!!!
Finished in 23rd position!!

It felt great and it’s still sinking in for Karen!! She so deserved to be there with me and celebrate our achievement.

She was brilliant during Pre and Final Qualifying and all the hard work and time she has put in to help me achieve this, is something I will always be grateful for. Can’t thank her enough!

It sure makes for a very Merry Christmas!! It rounds off what has been a good and enjoyable year. To have won my first tournament as a Pro (LET Access) and to have earned a Tour card… Just brilliant!

Thanks everyone so much for all your support.