‘WOW!! The morning after winning the WPGA International Challenge at Stoke By Nayland... My maiden Pro tour victory!! 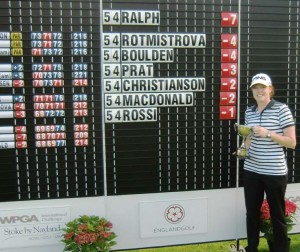 I can’t stop smiling!! It feels fantastic to have won such a big tournament and to have won it like I did!
The course was lovely and a real, fair test of golf. It was presented beautifully and the greens were rolling so well. It’s a stunning venue all round!

In the first round on Thursday, I shot 4 under par with no bogies on my card! I played steady on the front 9 which was the back 9 as I tee’d off the 10th. On my back 9, I had 2 Birdies and an Eagle! So, at the end of day one, I was joint leader.
I had never been in this position before and with a late tee time for round 2, had a lot of time to kill Friday morning. I managed it well and was looking forward to getting out there.
I had a friend travel up in the morning to caddy for me which was brilliant. I tee’d off the 1st and the front 9 was at times a little scrappy but my short game saved me and I made some great par saves. Walking off the 9th, I said to my caddy ‘it’s time to make some birdies!’ I went on to birdie the 11th, 12th and 14th and thus posted a score of 2 under par.
This left me in 2nd place, a shot behind the leader. It meant I was to be playing in the final group – again, something I have never experienced before. 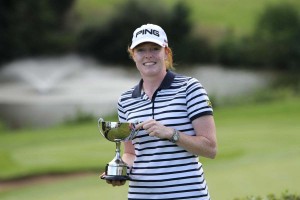 I felt calm all week on and off the golf course and maybe somewhat surprisingly, felt the same on the morning of the final round. Another friend came up to caddy for me and it sure helped to have her on the bag.
The final round, I played the steadiest golf of the week and gave my self 5 or 6 good birdie opportunities in the first 11 holes. They didn’t drop which was a little disappointing as one of the other girls in the group had holed a couple of long putts to increase her lead.
However, I was totally focused on my own game and this paid off. I knew I had to be patient and my caddy was saying that to me too. I kept plodding along and finally on the 14th, I made a birdie! On the 16th I had a long chip and run from the front of the green which I nearly holed for birdie. I was happy with the par though! 17th – I hit a great drive and had my favourite yardage in to the green. So it proved – I hit my shot to less than a foot away! Tap in birdie!
As I was to find out after the round, this gave me a 2 shot lead with one hole to go.
I never know my score when I’m playing and this helps to keep me focused on my game and not worry about other people ahead of me.
So, it was on to the 18th! The round was really slow and again we had to wait on the tee. I went to the toilet to pass some time and then I made a point of chatting to my caddy whilst waiting to hit my tee shot.
I knew I must’ve been close to the lead but my only thought was to make one more good swing. It’s a tough par 3 to finish but I hit a good Rescue wood pin high, left edge of the green. It ended up in the semi rough just off the fringe and had a tuft of grass behind it. The chip was downhill left to right. I felt good over it and was aiming to just hit it as close as possible.
I only went and chipped it in for another birdie!!!! What a great feeling with everyone watching!!!
I still didn’t know I had won! I turned round to my caddy to hand her my Wedge and she said ‘you do know you’ve won!’ I said ‘no!’
She was right, in the end I had won by 3 shots!!

Such an awesome feeling and a week that I will never forget!! I had great support from my friends who were also playing in the tournament and it helped. It was great to catch up with them off the course and it made the week more enjoyable.
To have two of my friends caddy for me and to be able to share the experience with them, makes it more special. A huge thank you to them both!! Brenda and Jane – you were fantastic!

The biggest thanks has to go to my Mind Coach/Mentor, Karen Francis… We’ve worked hard together for the past 2 1/2 years and to have achieved this is just so brilliant! Couldn’t have done it without her!

It’s an amazing feeling and it’s going to take a while to sink in!! Whooo hooo!!